1. Underwriters + algorithms = Best of both worlds.
We hear so much about machine automation replacing humans. But several promising applications are designed to supplement complex human knowledge and guide decisions, not replace them: Think primary care physicians, policy makers, or underwriters. Leslie Scism writes in the Wall Street Journal that AIG “pairs its models with its underwriters. The approach reflects the company’s belief that human judgment is still needed in sizing up most of the midsize to large businesses that it insures.” See Insurance: Where Humans Still Rule Over Machines [paywall] or the podcast Insurance Rates Set by … Machine Intelligence?

Who wants to be called a flat liner? Does this setup compel people to make changes to algorithmic findings – necessary or not – so their value/contributions are visible? Scism says “AIG even has a nickname for underwriters who keep the same price as the model every time: ‘flat liners.’” This observation is consistent with research we covered last week, showing that people are more comfortable with algorithms they can tweak to reflect their own methods.

AIG “analysts and executives say algorithms work well for standardized policies, such as for homes, cars and small businesses. Data scientists can feed millions of claims into computers to find patterns, and the risks are similar enough that a premium rate spit out by the model can be trusted.” On the human side, analytics teams work with AIG decision makers to foster more methodical, evidence-based decision making, as described in the excellent Harvard Business Review piece How AIG Moved Toward Evidence-Based Decision Making. 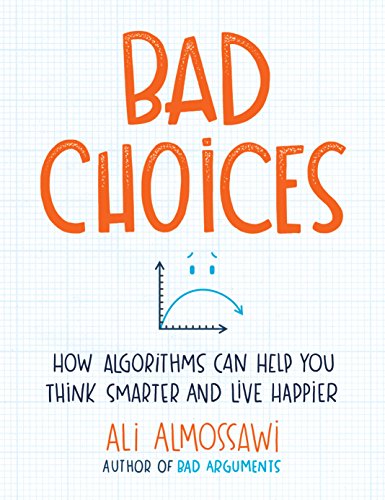 2. Another gem from Ali Almossawi.
An Illustrated Book of Bad Arguments was a grass-roots project that blossomed into a stellar book about logical fallacy and barriers to successful, evidence-based decisions. Now Ali Almossawi brings us Bad Choices: How Algorithms Can Help You Think Smarter and Live Happier.

It’s a superb example of explaining complex concepts in simple language. For instance, Chapter 7 on ‘Update that Status’ discusses how crafting a succinct Tweet draws on ideas from data compression. Granted, not everyone wants to understand algorithms – but Bad Choices illustrates useful ways to think methodically, and sort through evidence to solve problems more creatively.
From the publisher: “With Bad Choices, Ali Almossawi presents twelve scenes from everyday life that help demonstrate and demystify the fundamental algorithms that drive computer science, bringing these seemingly elusive concepts into the understandable realms of the everyday.”

Like it or not, oftentimes the assigned “value” of a health treatment depends on how much it costs, compared to how much benefit it provides. Healthcare, time, and money are scarce resources, and payers must balance effectiveness, ethics, and equity.

Guidelines for assessing value are useful when comparing alternative treatments for common diseases. But they fail when considering an emerging treatment or a small patient population suffering from a rare condition. ICER, the Institute for Clinical and Economic Review, has developed a value assessment framework that’s being widely adopted. However, acknowledging the need for more flexibility, ICER has proposed a Value Assessment Framework for Treatments That Represent a Potential Major Advance for Serious Ultra-Rare Conditions.

In a request for comments, ICER recognizes the challenges of generating evidence for rare treatments, including the difficulty of conducting randomized controlled trials, and the need to validate surrogate outcome measures. “They intend to calculate a value-based price benchmark for these treatments using the standard range from $100,000 to $150,000 per QALY [quality adjusted life year], but will [acknowledge] that decision-makers… often give special weighting to other benefits and to contextual considerations that lead to coverage and funding decisions at higher prices, and thus higher cost-effectiveness ratios, than applied to decisions about other treatments.”