People and artificial intelligence work together, sometimes quite nicely, on insurance underwriting, medical diagnosis, customer experience. (Plus autonomous vehicles, until some dude crashes his Tesla.) This is the Human+AI hybrid we often talk about at Museum of AI.

Humans have varying levels of awareness, input, or control over an AI system. Evidence suggests these factors influence how we apportion blame if something goes wrong.

When a Human+AI hybrid goes pear-shaped…

Emerging research examines how people assign blame when a robot makes a mistake. In Human Factors, Furlough and friends look at how people view imperfect Human+AI outcomes and apportion blame to humans, nonautonomous or autonomous robots, or environmental factors/conditions.

Hierarchy of blame! The authors “suggest that humans use a hierarchy of blame in which robots are seen as partial social actors, with the degree to which people view them as social actors depending on the degree of autonomy. Acceptance of robots by human co-workers will be a function of the attribution of blame when errors occur in the workplace. The present research suggests that greater autonomy for the robot will result in greater attribution of blame in work tasks.”

Others find evidence of the bias known as blame attribution asymmetry (Risk Analysis, January 2021). Writing about the world of Human+AI vehicles, Liu and Du explain a tendency to judge an “automation-caused crash more harshly, ascribe more blame and responsibility to automation and its creators, and think the victim in this crash should be compensated more.” Tread lightly, creators of factory automation and automotive tech ~ this echoes the knowledge base on assumed vs. imposed risks, two very different animals, as I learned working on energy projects.
I’d love to feature more evidence about nuances of introducing Human+AI hybrids. Please share.

Inspired by Google’s approach, I put together twelve Human+AI scenarios from the perspective of someone sharing control with a semiautonomous vehicle. View/download 12 Ways People & AI Work Together. The aforementioned levels of awareness, input, and control determine who sets the speed, plans the route, takes the wheel.

Let the blame game begin. It stands to reason that human control over AI is inversely proportional to the blame we assign for perceived errors. Google shares insight into permission to tweak (or distance oneself from) AI. System designers, business leaders, and policy makers should choose very carefully to avoid triggering uninformed backlash against their AI applications.

Planning a decision workflow? Easy does it

It’s challenging for subject matter experts to delineate how artificial intelligence might make a series of decisions. The exercise is bittersweet, partly because people so rarely take the time to explain our own decision processes.

Avoid confusing a decision outcome with the quality of the underlying process.

Things might get weird. Close examination of an existing business process can surface questions, prompting a purposeful redesign – such as when a group of engineers realizes they each approach the same problem differently. Expect intense moments when people lay bare their decision methods, especially when experiencing unfamiliar technology.

Fingerpointing is easy, identifying the problem is hard. Doing a post-mortem on a suboptimal outcome? Avoid the temptation to conflate an outcome with the quality of the underlying decision process. A low-quality process can produce evidence-based, algorithmic decisions, including decisions with ‘I got lucky!’ positive outcomes.

The takeaway: Who decides what?

Participants must clearly understand the capabilities/limitations of both the people and the AI involved – much easier said than done. Communicating back to the decision maker after a failure is particularly important.

When people perceive flaws in autonomous AI, they tend to blame machine creators, perhaps disproportionately. We are more patient with semiautonomous robot – but to build trust, human-in-the-loop AI must allow insight into a machine’s decision steps and exercise discretion over them. Then the humans must acknowledge their own flawed contributions, if any. 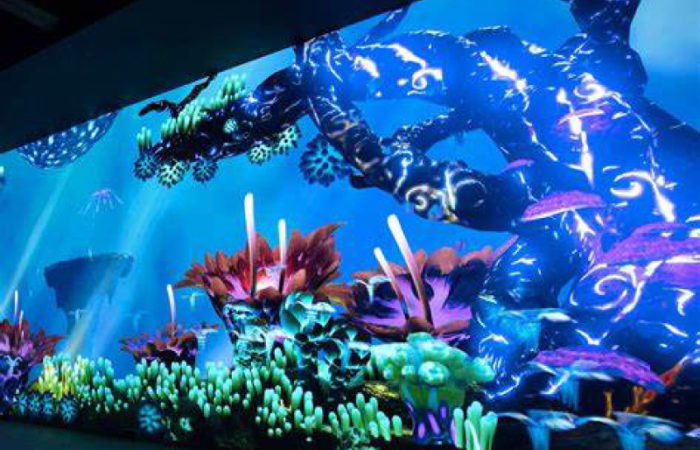 A peek inside LMNL’s immersive experience.