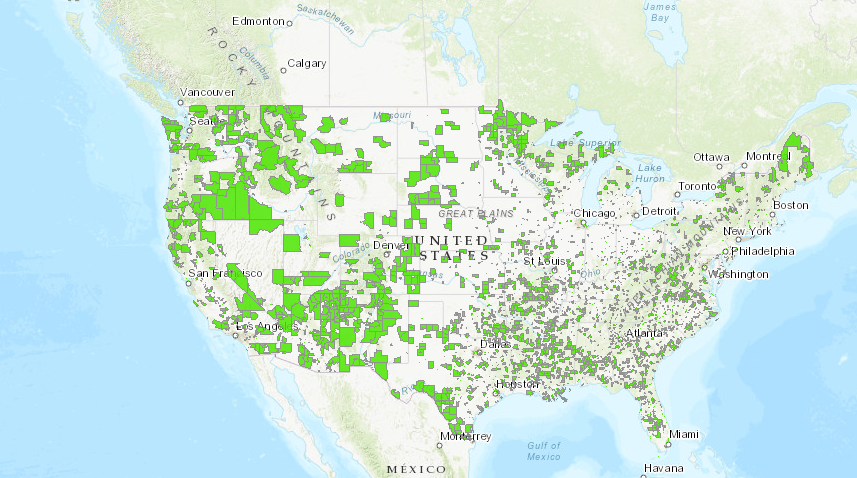 1. Biased analysis → Misunderstood cause-effect
In Biased Ways We Look at Poverty, Adam Ozimek reviews new evidence suggesting that food deserts aren’t the problem, behavior is. His Modeled Behavior (Forbes) piece asks why the food desert theory got so much play, claiming “I would argue it reflects liberal bias when it comes to understanding poverty.”

So it seems this poverty-diet debate is about linking cause with effect – always dangerous, bias-prone territory. And citizen-data scientists, academics, and everyone in between are at risk of mapping objective data (food store availability vs. income) and subjectively attributing a cause for poor habits.

The study shows very convincingly that the difference in healthy eating is about behavior and demand, not supply.

Ozimek looks at the study The Geography of Poverty and Nutrition: Food Deserts and Food Choices Across the United States, published by the National Bureau of Economic Research. The authors found that differences in healthy eating aren’t explained by prices, concluding that “after excluding fresh produce, healthy foods are actually about eight percent less expensive than unhealthy foods.” Also, people who moved from food deserts to locations with better options continued to make similar dietary choices.

Food for thought, indeed. Rather than following behavioral explanations, Ozimek believes liberal thinking supported the food desert concept “because supply-side differences are more complimentary to poor people, and liberals are biased towards theories of poverty that are complimentary to those in poverty.” Meanwhile, conservatives “are biased towards viewing the behavioral and cultural factors that cause poverty as something that we can’t do anything about.”

Ugly Research has your back.

2. Communication fail → Revised definition of ‘good data science’
Emma Walker explains on VentureBeat The one critical skill many data scientists are missing. She describes the challenge of working with product people, sales teams, and customers: Her experience made her “appreciate how vital communication is as a data scientist. I can learn about as many algorithms or cool new tools as I want, but if I can’t explain why I might want to use them to anyone, then it’s a complete waste of my time and theirs.” 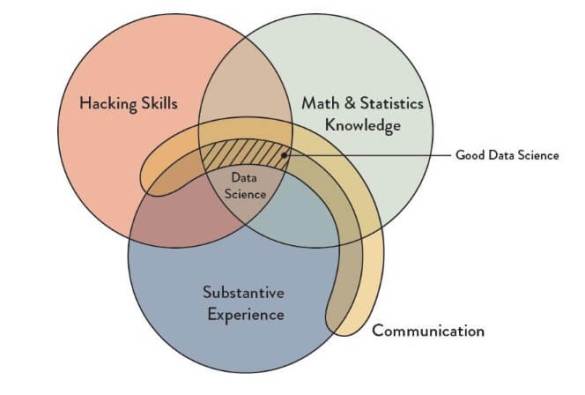 After school, “you go from a situation where you are surrounded by peers who are also experts in your field, or who you can easily assume have a reasonable background and can keep up with you, to a situation where you might be the only expert in the room and expected to explain complex topics to those with little or no scientific background…. As a new data scientist, or even a more experienced one, how are you supposed to predict what those strange creatures in sales or marketing might want to know? Even more importantly, how do you interact with external clients, whose logic and thought processes may not match your own?”

Walker reminds us of the now-classic diagram by Drew Conway illustrating the skill groups you need to be a data scientist. However, something is “missing from this picture — a vital skill that comes in many forms and needs constant practice and adaption to the situation at hand: communication. This isn’t just a ‘soft’ or ‘secondary’ skill that’s nice to have. It’s a must-have for good data scientists.” And, we would add, good professionals of every stripe.

3. Subjective data story → Masked bias & error
Gartner describes how the data story, “a hybrid form of insight delivery — is gaining traction, offering a more engaging means of communicating findings than traditional reporting or data visualization alone.” However, they caution us to watch for “subjectivity when narrative combines with data.” The firm offers Beyond BI Reporting: Engaging Decision Makers Through Data Storytelling by James Laurence Richardson. But “untutored, the use of data storytelling can mask bias and errors, undermining some business benefits.”

4. No data strategy → Dead company
Dwayne Gefferie has lots of interesting things to say. Highly recommended: His post Become Data-Driven or Perish: Why your company needs a Data Strategy and not just more Data People.

First Round Review (@firstround), funder of several Tier 1 startups, highlights how to Master the Art of Influence: Persuasion as a Skill and Habit. “Any time you’ve included a bulleted list or a paragraph of text, or even a graph without a very clear, obvious explanation, you’ve already lost. To be persuasive, you have to keep your message even simpler than you think.”

Early Google and Facebook employees created the Center for Humane Technology – to stop tech from hijacking people’s minds. They have a Director of Research position open, plus others.